A busy Songkran this year – that time of the year when Thais like to splash water everywhere. While I did get a chance to unload a few rounds (ok, so it was just a water gun but who cares?) it was a wedding that took centre stage this year.

Two of our good friends were getting married and we wanted to be there to share in their happy day, so made the trek north from Bangkok to Tapan Hin in Pichit province.

After piling on to a bus at 11 AM we arrived around 4 PM, including a 20 minute pit stop to grab a quick bite to eat and empty the bladder. Traffic was pretty good, all things considered.

That first cold Leo was heaven sent nectar! An early night was called for as the next day would be long and tiring for all involved (little did we know 555)

Wedding Day and a water fight

This was the first traditional Thai wedding that I had attended and it’s quite a spectacle. The whole shebang, if you will!

It kicked off at 6 AM with a blessing by the local monks and the first cold beer was necked at 8 AM. You know things won’t end well after that! Loud music and dancing in the street kicks off a parade where the groom has to pass through many gates, before reaching his bride.

After that the family are presented with sinsot, which is a dowry for the bride’s parents, involving a combination of cash and gold.

Guests then line up and tie a piece of string around the wrist of the bride and groom and pour water through their hands. If you’re lucky you’ll have time to grab a bite to eat somewhere along the way (they usually wont!)

Around midday the ceremonial duties had been completed and the water festivities began. Don’t think you’ll stay dry. Everyone gets a soaking. It’s all in good fun, though. Be prepared with phones and wallets safely sealed in water-proof bags.

That night we ate at a local restaurant and the Mrs had an allergic reaction to something she ate, which ended up with us at the local hospital. We had to drag the groom away from his own party so he could provide directions 🙁

He stayed for an hour or so – what a sport. Truly a great man! Thanks mate, much appreciated.

An exhausting day for the bride and groom – better him than me, I say! I was very happy with the way my nuptials went down, thank you very much 🙂

It was great to be there, honored that we were included in their special day.

Thanks Darryl and Prae. I wish you both health and happiness for the years ahead together. Like mum said though, enough kids already 555!

A few days after the wedding we decamped to Kanchanaburi for some much needed R&R. I managed to fit in a visa run, at the nearby crossing with Myanmar, located at Phu Nam Ron.

Very easy and cheap. As I only had 4 weeks left on the clock, this was a chance to save some cash, as I was already in K’buri (otherwise I might have had to fly somewhere for a few days and that gets expensive). All up it worked out to about 1500 THB. Nice one!

If heading from Bangkok, you can get train to Kanchanaburi from Bangkok Noi (Thonburi) for 100 baht. Then you can get a bus from K’buri bus station to Phu Nam Ron for 50 baht (one-way). We caught a van back to K’buri for 80 baht per person.

Note that bus station is not walk-able from the train station or bar area. A 30 baht motorbike taxi ride will get you there pretty quickly though.

Once there, there is a small travel agency just after the Thai immigration point called Three Dawei. For a 960 THB ‘all-in’ fee an agent will whisk you across the border and back in short order.

You sit in the car on the Myanmar side while agent takes your passport into a small shack and returns with entry/exit stamps. Wink wink stamp stamp.

Then after being dropped off back on the Thai side you re-enter Thailand as per normal.

I get the impression that it would be difficult to take your own car across. Unconfirmed. It’s a no-brainer to use the agency service for the price IMO.

We left K’buri on the 10 AM bus and were back at hotel by 3 PM. There are no return public transport options between 11 AM and 2 PM. It seems everyone stops for lunch, so if you don’t want to hang around for a few hours you would need an early start to get across the border and be back in time to catch the 11 AM bus back to K’buri.

Having said that there is food and coffee available so it isn’t too hard to kick back for 90 minutes or so as long as you stay out of that scorching sun.

A hidden gem – possibly the closest border crossing to Bangkok too.

First train out of Kanchanaburi 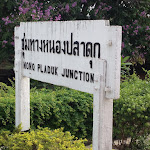 Come Monday morning I was happy to be heading home. Just wish Uncle Mark hadn’t forced all those tequila shots down my throat the night before (I was cursing him when I had to obey the 5.30 AM alarm!)

We made our way to the train station and caught the 7.20 AM service bound for Thonburi, Bangkok (aka Bangkok Noi). The train arrived right on time, and 3 hours later we were looking for a taxi driver who was willing to use the meter.

Four and a half hours after leaving K’buri we walked in the door with my wallet only 290 THB lighter. Amazing Thailand.

RIP – Farewell to a gentle giant
Chillin like a villain