A trap for young players – if you are getting an overnight train from Turin to Barcelona it may not depart from the main station. Is my memory deceiving me? Google says it is now not possible to get a direct train but I’m pretty sure we did just that – the Trenhotel, perhaps?

It was a good experience but I have to say that for some reason I just can’t sleep on trains, or at least sleep well. We arrived in Barcelona a little later than scheduled and navigated the local subway to reach a bus station where we were whisked off to the seaside resort of Tossa De Mar on the Costa Brava.

The bus trip was a little hairy, but the town itself was picturesque and inviting. We snagged a great deal at the Reymar Gran Hotel and Spa – it was a steal! 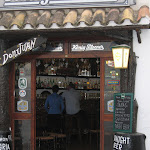 5 days of lazing by the pool, feasting on Tapas and Sangria and exploring the small town. It was a holiday within a holiday, if you catch my drift. Not to mention I made good friends with one of the local brews Estrella Damm.

Sure the place was full of Poms, but I didn’t that the deter me. Found a great little bar in town where all the hams were hung from the ceiling to age, and man was it melt in your mouth kind of stuff. You can see from the pics above that the lads even let me pull a few beers!

When it was time to go we made our way back to Perpignan, France and the trek north to Paris

We caught the train to Avignon and stayed in an Etap hotel – I think they are gone now, swalled up by one of the bigger chains, which is a real shame as they were a fantastic budget hotel chain that we used extensively throughout our time in France.

Avignon itself was nice, but we ended up having to stay a little longer than anticipated as we were caught up in a grève (strike), a common occurrence in these parts. C’est la vie!

Then it was off to Beaune to sample the wines of Burgandy. Managed a fantastic tasting at one of the underground cellars where you get to help yourself to the wine, very different from the Australian version. We shipped a few dozen bottles back home which arrived safely in due course. As for the Boeuf a la Bourguignon I can do better myself – it wasn’t up to scratch!

As luck would have it though, we stumbled across a festival where they held some type of crazy bike race. We stopped to wet the whistle and watch the colorful entrants pedal their hearts out.

One of the highlights of the trip was a wine tour that took in some of the vineyards of Burgandy. A great tour guide, Michel IIRC, which makes all the difference. 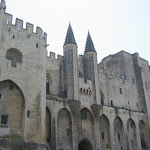 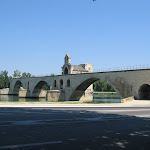 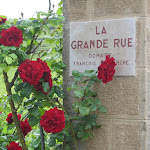 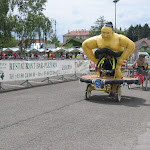 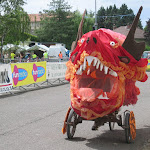 Before long we found ourselves stuffing a quick Croque Monsieur down our gullets before catching the TGV to Paris.

Ah, the City of Light. We had left it until last to explore Paris and stayed out at Bercy. A bit of a hike, granted, pretty much out on the periphique.

We did all the things expected of a first time tourist in Paris – Notre Dame Cathedral, The Louvre, Eiffel Tower, Montmartre and Sacre Coeur, Le Marais, Centre Pompidou and the like. I tried to replicate a walking tour around the left bank visiting Hemingway’s haunts, with some degree of success.

Stuffing down baguettes and the occasional pain au chocolate kept the energy levels up as we moved among the crowds. We were in Paris and it was great!

Eventually the time came to board the flight back home. We said a tearful ‘Au Revoir‘ as the plane taxied towards the runway.