I’d told the boys at The Tavern I was headed to China to play in an invitation only backgammon tournament. A few pats on the back and free beers ensued until one smart-ass wanted to challenge me to a game.

“Sure mate. But I don’t play for less than a thousand dollars a point” I said.

He quickly put the set away and skulked out of the bar.

By 2016 my best mate had been teaching there for a few years. We didn’t get many chances to catch up any more so it seemed fitting I pop over to visit him.

First step was getting a visa, which according to my online research wasn’t going to be easy.

I accosted my favorite travel agent to dummy up some flight details which were needed for the visa application. A visa which might not be granted.

Then I marched myself off to the Chinese consulate to file the paperwork.

Can’t reveal what I wrote down. (*cough*)

It must have worked as days later I had a spanking new Chinese visa in my passport.

Right then, time to book some actual flights.

Before I knew it I’d landed in Tianjin, China.

I recall getting a bus from the airport before a quick taxi trip to his hotel where I’d be sleeping on the floor for a few nights.

Free accommodation! If I’d waited until I had enough money to travel I’d be left at home.

We’ve been mates since little school. Amazing friendship. Put us in a room with a backgammon board, pack of cards and a few dozen beers and we’re as happy as pigs in mud.

He was on a good deal there. Every afternoon about 5pm we’d wander into the lounge for free booze and to have a chinwag to his mates. I remember a burly oil and gas guy. There’s always one. Salt of the earth blokes, I love ’em.

We hit a local club. Hi-so Chinese guys surrounded by bottles of Champagne and great dancing girls. After nursing a few beers for an hour or so we left.

My memories of Tianjin are the beers being cheap and it being a pretty chill place.

Then I headed to Beijing.

Trains are fantastic in China. Only took a few hours and then I had to navigate the subway system to my hostel. One of my superpowers. Love subways and this was the last trip my trusty backpack and I would take together. We’d been together since I was 18 and it was in tatters. A fitting farewell.

Finding my bed at 365 Inn wasn’t easy. Doesn’t help walking past it 4 times does it?

Made an idiot of myself by asking a few coppers if they could help me find it. The old 你好 / nǐ hǎo. 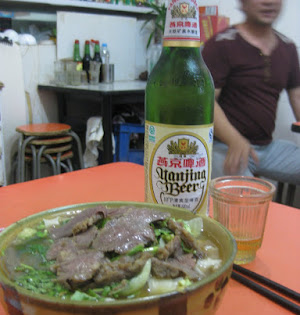 It’d been a while since I’d stayed in a dorm room with randoms. Didn’t bother trying to make friends. Happy to hit the streets and soak it all up.

Wandered around. That’s my M.O. Do a reccy, try and get your bearings.

Ended up at a little hutong hole-in-the-wall place and slurped down a bowl and and a beer before having an early night.

Over the next few days I’d walk until I couldn’t. This is a city I would largely explore on foot.

The craft beer scene in Beijing was really pumping.

Much better than that of Bangkok which was pretty much non-existent.

Not surprisingly, the highlights of this trip centered around beer.

Great leap brewing and Slowboat Brewery were both terrific.

I headed into Great Leap shortly after opening and had the place pretty much to myself. Lovely courtyard. You can imagine the place having a great vibe when full.

The crew at Slowboat were great and made me feel really welcome. The place fills up quickly and I wasn’t giving up my spot at the bar for anyone. That’s the Fry Burger by the way, which was sensational.

NOLA cafe
After walking through the Ming City Wall Ruins Park, I found myself wandering aimlessly around various embasies trying to find this cafe. I became increasingly paranoid I’d be scooped up by a police car or at the very least have to show papers.

My feet were killing me and I must have been starving to put away a bowl of gumbo and a Cuban sandwich. Both were excellent. Washed the lot down with some PBR. Think they had a 2-for-1 deal and I was on a budget.

My three days in Beijing flew by. I didn’t take in the popular sights, hoping to drag the wife over so we could sample them together.

I put it down to home ground advantage.

I know looks aren’t everything, but I have them just in case.
My preferred pronoun is ‘your majesty.’

How to pour a wheat beer

Are you a winner?
Are you looking for a winner?
Then download my CV and get in touch

A great spot to be on a Saturday night :-)