There’s an old Czech joke which goes something like this: A kid walks into a bar and asks for a beer. The bartender says “wouldn’t you rather have a lemonade?” “Yeah”, the kid replies, “but I’m three crowns short”

Welcome to the Czech Republic – the country where beer costs less than water.

A few months back I needed to get out of Thailand for a while. The heat, the wife, and the bad beer had all conspired to plunge me into the depths of despair – it was time to escape long enough to clear my head.

Being a digital nomad has its advantages as long as you can find somewhere to pitch your tent where the living expenses don’t require you to carry an American Express Centurion card. Armed with a fistful of dollars I’d somehow scammed from the markets, I figured there was enough to survive in Europe for a couple of weeks as long as I slummed it a little.

The budget was tighter than a nun’s asshole. After accommodation and travel expenses I was left with € 56 a day to cover food, spending money and sightseeing, which consisted mainly of the inside of pubs and supermarkets.

My sort of getaway – YMMV.

After a 12 hour flight to Frankfurt, I boarded a long distance train to the sleepy town of Plzeň, Czech Republic.

Sleepy as in only 170,000 residents. When you live in a city of 8 million souls it feels that way.

By this point I had already gleaned some important travel tips, which I’ll share:

May is a great time of the year to visit with daily temps averaging 10 – 20 celsius, and the days long. The sun rose at 5.30 AM (perfect for that early morning stroll to get the blood pumping) and didn’t set until 20.30, so 15 hours of daylight.

A stark contrast to Bangkok where the longest and shortest days of the year are only separated by 1½ hours and it’s 34 degrees every day.

Plzeň – The birthplace of pilsener

A pilgrimage is, by its very nature, an intensely personal journey.

While it may take some to Jerusalem and others to Mecca, there was only ever one spot for me.

They brew a beer there called Pilsener Urquell – maybe you’ve heard of it?

It literally means “pilsener from the source”, aptly named as it’s where things started way back in 1842.

Stylistically, a pilsener is a lager which is fermented at lower temperatures than an ale and left in cold dark cellars to age for months. BTW, lager gets its name from the German word lagen, meaning “to leave” – Fascinating stuff!

The stock-standard Urquell is great. It’s what you’re used to drinking back home, only fresher.

But there’s another flavor you’ll want to savor, trust me.

If you can, get your laughing gear around Pilsner Urquell Nefiltrovany Lezak. You’ll need to head to the bars, as it isn’t available in the shops.

Here’s what Will Hawkes, travel writer for the Telegraph (UK) had to say about this particular variant of the amber fluid:

A waitress places a dumpy, fat-bottomed glass tankard of Pilsner Urquell Nefiltrovany Lezak – an unpasteurised, unfiltered version of this famous beer – in front of me. I’ve had it before, on a previous flying visit to Pilsen, but the experience is still a wonderful surprise. It’s soft and lightly carbonated, and the flavour is a beguiling, more-ish blend of caramel, biscuit and spicy bitterness. It’s delicious, and totally unlike most pale lagers you’ll find in Britain.

Drinking one is like having Angels dance on your tongue. I want another just reading it.

While the Japanese (Asahi) recently swallowed up Urquell after purchasing it along with a number of other European labels from Anheuser-Busch InBev (NYSE:BUD), it remains one of the few mass-produced beers to have retained its character.

Pop quiz: Who are the biggest beer drinkers in the world?

Gotta be the Germans, right?

The answer to that question is resounding: the Czech Republic. According to research by the Japanese beverage company Kirin, the country has topped the per capita beer drinking table for 23 consecutive years.

In 2015, the most recent year for which statistics are available, the Czechs drank 142.4 litres per person. That’s the equivalent of 250 pints – or one every 35 hours. But, given that minors are unlikely to be contributing to that figure, it’s safe to assume that the average beer drinker probably guzzles quite a bit more.

A few surprises there – how the hell did the Seychelles take out the silver?

And the Germans pipped at the post for bronze.

Romania – meh. Not much else to do there I guess.

When in doubt, have another beer

While I didn’t manage to knock back 143 liters of the amber fluid (the average annual per-capita consumption in these parts.), I did sink a few battleships worth.

Not one to mess around, I had two weeks, not fifty-two, so I had to make them count, while still getting some work done at the same time (*cough*)

Here’s a few which passed my lips:

During a weekend pitstop in the spa town of Františkovy Lázně near the German border, I stumbled upon the oddly named Cafe Illusion History. The house pour Bakalář turned out to be pretty decent. Knocked back a few while tucking into some sausages which were served with rye bread and horseradish.

Wandered around town after lunch and found a place to crash for the night, stashed my bag and hit the showers. I was back on the beer hunt in no time. 🙂

Next stop was a quaint bar called Beethoven. Apparently, he spent a considerable amount of time there. (the town, not the bar)

Budweiser Budvar was the house beer and at € 2 a glass I was well capitalized for a Sunday super sesh.

This is the original Budweiser, vastly superior to what the Yanks bottle.

The real Budweiser is a winner!

The late Michael Jackson aka ‘The Beer Hunter’ says of Budvar “it’s a great beer because it has great raw materials and great brewers. They produce it in a slow and painstaking way. Its integrity is best served by its being produced in its town of origin, in a region with pride in its beer.”

The only thing I said after drinking it was “one more, please”. I had to say it in German, though (“ein bier, bitte”). As I quickly discovered, English was about as useful in the Czech Republic as Bert van Marwijk at a Socceroos World Cup match.

After half a dozen of these beauties, I devoured a pizza followed by the wickedly good Palačinky, Czech-style pancakes covered in vanilla sauce.
[Don’t forget to take your Metformin – wife]

Just for good measure I then had four more brewskies before stumbling around the corner and into bed. 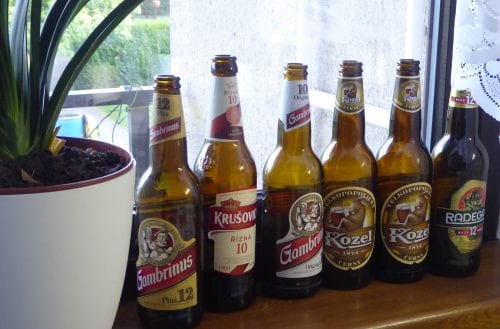 A selection of local brews.

Note the numbers on the bottles. In CZ alcohol strength is labelled in degrees plato not by volume.

The cost of living is insanely cheap in the Czech Republic, so much so I’m trying to work out how I can spend more time there.

If you’re looking for a European destination which won’t pummel the purse, CZ could be just the ticket.

Especially if you love your beer.

FULL DISCLOSURE: The author drank every single beer displayed. All pictures are original photography by the author (using his trusty 2nd hand Panasonic Lumix DMC-TZ70), including the feature image of the Hotel Continental in Pilsen, where he couldn’t afford to stay – well above his pay-grade!

The pork fillets and potato salad were delish and expertly prepared by the staff at ‘Na Parkanu’.

Neither Lufthansa nor Aeroflot have made the shortlist for future trips. AirBNB, however, was fantastic and he thanks his hosts Hana and Stan for their hospitality during his stay with them.

He misses Pilsener Urquell terribly and looks forward to returning to the Czech Republic.

Guest
turtle
Share On TwitterShare On Google
Nice… We had 3 stops in the Czech Republic on our recent trip. Prague. Over-rated, over-priced and full of rip off merchants. Beauty comes at a price I guess. Ceske Krumlov. A small quaint version of Prague. Still too many tourists even in Winter! (and Summer is hell I am told) but with fewer rip-off merchants. And Ceske Budejovice… Pilzen was a bit of a detour so this home of the original Budweiser was a nice stop 20minutes up the road from Krumlov on the way back North. Normal people going about their daily routine without all the tourists. After… Read more »
Vote Up0Vote Down  Reply

Agree, even though I only skipped through Praha. I really prefer smaller towns now they have much more character, eh?

Good use of the remaining coins reminds me of my last day in CZ. All part of the game.

Budvar is an amazing beer, can still taste it. Czech beers are right up there IMO and boy was that a great trip. You feast on the memories of a good one for years to come.