December 2014 saw us heading to the somewhat sleepy seaside hamlet of Hua Hin for some much needed R&R – it had been a tumultuous year, to say the least, and we rented a house in a nice estate for a few weeks over the Christmas period.

Bangkok is a dynamic city but there’s a type of ‘cabin fever’ that sets in after staying here a while. Maybe it’s being cooped up in a condo for extended periods, the air quality or just living in a concrete jungle. Who knows? But it appears this affects all expats to some degree.

Hua Hin, on the other hand, has the seabreeze without the sleaze, and everything you need right at your fingertips. Malls, cinemas, bowling and beaches. A large expat community and only a few hours away from the big smoke.

We noticed during our holiday that quite a few houses in the estate were for rent – and by the time we headed back to Bangkok we had signed a one year lease on a two bedroom place for THB 15,000 per month – a great price, we thought. It was love at first sight, as we could see ourselves cooking gourmet meals in the kitchen and sitting in the Thai wooden hut in the backyard on lazy Sundays after a swim in the pool. Strange how we romanticize the future.

The house was home to a number of ornamental chickens and I considered this an auspicious sign that good fortune was heading our way and we would be showered with abundance. The house became known as ‘Baan Gai’ – The Chicken house.

We needed some wheels so purchased a great little scooter for THB 19,000 – this actually worked out far better than renting one, as we got most of our money back when we sold it back to the shop. It was a good little runabout and I loved being on the back of it as the missus whizzed us off to shopping every week. 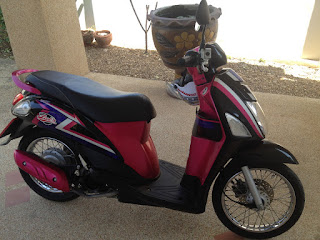 05-Feb-2015 13:46, Apple iPhone 4S, 2.4, 4.28mm, 0.004 sec, ISO 64
View at Picasa
I had avoided riding much during my time in Thailand mainly due to my penchant for a cold beer coupled with lack of insurance. A terrible combination as many a foreigner has discovered to their dismay. I tamed the beast to a degree and allowed myself short trips on quiet roads. The thrill was tangible, as if the pages of ‘Zen and the Art of Motorcycle Maintenance‘ had come to life.

We lived on Soi 6, in an area known as Borfai, which was a semi-rural part of town and brought back many memories of my first few times in Thailand. A definate ‘je ne c’ais quoi’, but I think it’s the slower pace of life.

“Hows the serenity?”. If you’ve seen the movie “The Castle” you’ll know what I’m talking about. In the mornings I would sit on the front porch with my cup of tea and could hear the trains in the distance while watching the birds congregate on the neighbors roof. At night it was initially difficult to get to sleep because it was just too quiet. We had good neighbors, a swimming pool and a little shop out the front of the ‘moo baan’ selling ice cold Leo beer. There was a great local watering hole down the road with the requisite pool table, music a la YouTube and frothy chops. What more could you want?

I miss those things, just thinking back on them.

We were lucky enough to already have a Thai friend living in Hua Hin, and were accepted into her small tribe of friends. Impromptu gatherings with fantastic food would often materialize out of nowhere and continue late into the night, powered by bottles of Thai whiskey. As everyone lived close by, stumbling home in the wee hours was easily navigable and safe.

There are a plethora of great little cafes and restaurants to explore for Sunday brunch. One of our favorites was the ‘Passport Cafe‘ on Soi Samorpong, run by the affable American Mike and his family. The bar area proper in the heart of town is compact and coupled with one of the many restaurants on offer made for an enjoyable night out.

I treated myself to a new BBQ, barbecuing being a passion I hadn’t been able to do indulge in for a few years. I find meat, metal and fire to be very therapeutic. 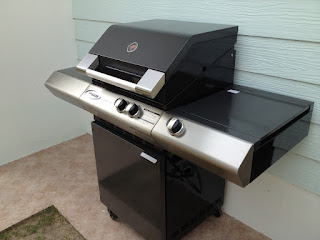 The lads who delivered and assembled it did a smashing job and a mate had hooked me up with a fantastic supply of aged Aussie beef which, while expensive, when cooked was better than anything I could buy in a restaurant. Absolutely just melts in your mouth.

We made good use of both the BBQ and a roomy backyard, hosting some epic parties during our time there.

Given that all our good friends were still in Bangkok, it was hard leaving them behind and we would make frequent small trips back to catch up with them.

Getting around is more expensive. Once you leave the environs of greater Bangkok behind you, the cheap taxi fares disappear along with it. Tuk-Tuks are the standard form of transport, and while they are much more comfortable than their Bangkokian compatriots, they are not cheap when used frequently. On the flip side it’s way cheaper than owning a car. All a matter of perspective, I guess.

The house was hot, again something we didn’t realize until living there for a while. It lacked airflow during the day which is essential in cooling houses over here, had too much glass and French doors, which aesthetically pleasing, are not the best choice for front doors. The daily routine included liberally applying mosquito repellent before the nightly mozzie attack would begin.

Frequent trips back to Bangkok became an annoying necessity. Whether to handle some administrative task, catch up with friends or shopping that wasn’t available locally, it seemed that either of us was heading back every month or so for a few days. This seems a common pattern among friends also.

The transport options between the two centers aren’t great.

Water shortage – a classic example of things you can’t learn on an inspection and you don’t think about when the rose tinted glasses are on. It seems that the infrastructure for pumping water to the estate was sub par, to say the least. The first few months were OK, but after a while it became necessary to purchase tanker loads every few weeks. While it didn’t break the bank it was another expense that added up. The cynic in me thinks that someone just turned the supply off every now and then to force punters to let the moths out of their wallets.

When it came time to renew the lease, we knew our time in Hua Hin was coming to end. For many reasons Bangkok was calling us back

It was fitting that we celebrated Christmas 2015 with good friends, a fantastic spread and lively banter. Shame Ronnie missed out on the pavlova! Things had come full circle, as they often do. Thanks to our lovely hosts David and Shannon for your great hospitality.

‘Baan Gai’ had not been the Utopian paradise we were looking for – In hindsight, we had made the classic mistake of falling in love with a place while vacationing there.